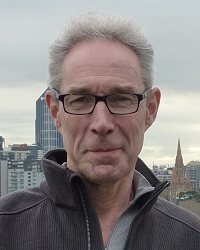 A leading research center administrator at Cornell since 2001, Graham has served as associate director of the Energy Materials Center at Cornell (EMC2), the Center on the Microenvironment and Metastasis (CMM), and Cornell’s Nanobiotechnology Center (NBTC). Previously, he worked as principal scientist at XRT Corporation, a medical technology company in Minneapolis, and as a researcher in Cornell’s Laboratory of Plasma Studies. Graham holds a PhD in physics from Imperial College, London.

Since first moving to Ithaca in 1983, Graham has helped make the local community a richer and more sustainable place to live. He served as an alderperson on the City of Ithaca’s Common Council from 2012-2021. He previously served as a member of Ithaca’s Parks Commission and as a board member for the Kitchen Theatre Company and GreenStar Cooperative Market. Graham continues to enjoy local theater and local food, as well as hiking, swimming, and gardening.