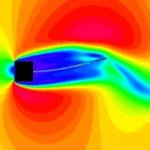 Cornell researchers will investigate the principles and feasibility of vibro-wind power: harvesting energy from the wind as it flows around commercial and residential buildings. An alternative to conventional wind turbines, vibro-wind power extracts energy from small vibrating elements mounted on the structure, converting kinetic energy into electrical energy that can be used in the building’s operation. The group will analyze the effects of wind on single and multiple interacting flexible structures, from the millimeter to the meter scale. This new technology for integrated power generation may complement solar energy, especially in regions like central New York where solar availability is low and in areas of high building density.