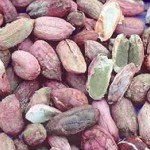 Malnutrition is responsible for more than two million children’s deaths annually. Inadequate food may be only one reason. Exposure during pregnancy and early childhood to mycotoxins produced by crop molds may cause child stunting and other effects of malnutrition. Cornell researchers will work with mothers and babies in Zimbabwe to measure the relationship between mycotoxin exposure during pregnancy and childhood growth. The project will lay the groundwork for research to identify a causal mechanism—a breakthrough that could transform how the global health community fights childhood malnutrition.