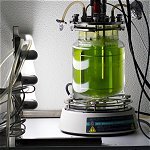 Aquatic microalgae offer several features that make them an attractive prospect for biofuel production, including rapid growth and the ability to thrive on marginal land and in brackish water. Despite this potential, no large-scale facilities for commercial algal biofuel production currently exist, due to significant profitability and scale-up problems. Using a well-studied algal species, Chlamydomonas reinhardtii, the research team will focus on the production of a high-value industrial enzyme, along with oil and carbohydrate accumulation. They will develop diagnostic proteomic methods for algal culture monitoring involving rapid detection of specific proteins in a complex background – a new tool that stands to increase output of both the enzyme and lipids or oil for biodiesel.